A contemptuous razzing sound made by sticking the tongue between the closed lips and expelling air; a razzberry. It has long been associated with New York baseball fans who have never been shy about criticizing players in disfavor. 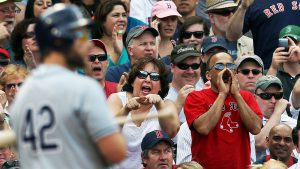 . “The crowd gave the hero a Bronx cheer for the effort and razzed him frequently thereafter, with some justice, too, for [Babe] Ruth’s actions were an insult to the intelligence of the people who had paid their good money to see him play baseball” (The New York Times, Apr. 10, 1924; Barry Popik). 1st use. 1923. “When Griffith, up again, flied to centre for the third out, the fans gave the Giants a hearty Bronx cheer” (The New York Times, May 4, 1923; Barry Popik). etymology. Although there is no direct evidence to support the connection, the term may have been created in reference to the Bronx-based New York Yankees. Barry Popik noted that the term appeared in The New York Times in a nonbaseball context as early as Oct. 29, 1904: “Bronx Cheers for Herrick.” Writer Arthur “Bugs” Baer claimed that he invented the term for that “clarion call of disgust” in reference to a Benny Leonard prizefight in Madison Square Garden in which the “tender-hearted Bronxites” were upset that the referee did not stop the fight in the right round (San Francisco Examiner, Apr. 6, 1956): “They let go with that accolade of tight-lipped criticism that sounded like tearing a yard of calico. I named this ‘The Bronx Cheer.’” extended use. The “cheer” has been evident in other sports. “The Bronx cheer has even invaded Forest Hills. During tight tennis matches there this last summer the gallery with increasing frequency undertook to line the matches” (San Francisco News, Dec. 31, 1931; Peter Tamony).